Whatever You Do, Don’t Hit The Gas! 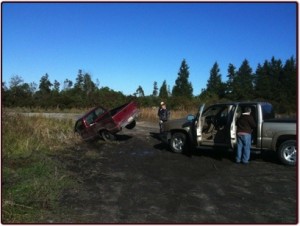 Just a couple of weeks ago, I was “off-roading” with a friend and our sons; we were enjoying some “guy time” in the woods. We decided to stop and admire the view of one of the many beautiful lakes in the Croatan National Forest. Nearby, a couple of young Marines, about 19 or 20 years-old, were fishing. We talked to them for a few minutes and they informed us that the fish weren’t biting. Pretty soon, they decided to pack up and try another location.

While attempting to leave, they “accidently” drove into a very large hole in the ground; a hole that was almost the size of a swimming pool and contained nearly as much water as one. I still have no idea how on earth they didn’t see the gaping void in the ground.

After the young men climbed out of the truck and let us know that they were okay, I explained to them that I had tow-chains in the back of my truck (okay, maybe I am a little more redneck than I care to admit), and would gladly pull their vehicle out of the muddy abyss (since I have the king of all 4-wheel drives–a Chevy Z71).

After hooking up the chains, I instructed the two Marines on exactly how this little exercise should work. After all, pulling people out of ditches and other unique jams is something that I have done on several occasions (that’s one of the perks of owning a 4-wheel drive). My last words to the young men were, “Whatever you do, DON’T HIT THE GAS! Keep it in neutral, and I’ll pull you right out.”

My Chevy pulled them out with great ease. But, as soon as their vehicle was on solid ground, the guy sitting in the drivers seat of the stuck vehicle tried to hit the brakes, but accidentally hit the gas pedal instead. Within a split second, the back of his truck slammed right into the front of mine! My initial reaction was one of frustration because the last thing I had said was, “Whatever you do, DON’T HIT THE GAS! “.

Because I’ve been around a couple of decades longer than the two young men, I have seen these types of predicaments go wrong before. After almost four decades of life, I’ve made my share of stupid mistakes; plus, I have witnessed the screw-ups of lots of other people, too. It’s safe to say that I have a slightly broader perspective than an average 19-year old. I have the ability to see things they cannot see; just like someone who has been around for a couple decades more than I have, can do the same for me.

Thankfully, the damage wasn’t too bad. And believe it or not, I didn’t get mad at the two marines. Instead, I told them not to worry about it; it was the least I could do for two guys that sacrifice their lives for me, my family, and our nation. However, it did take me a couple of days to “get over it”. After all, that debacle could’ve been avoided had they just paid attention and listened to my instruction.

I wonder if God feels like that with me sometimes? He gives me wise counsel through the Bible and through His Holy Spirit, and I don’t always listen; in fact, on occasion, I do the exact opposite. I try to do things my own way; I get impatient with God’s process and wind up making some really dumb mistakes.

God has the ability to see things that I cannot see because, after all…He’s God. He is far more wise than I am and He has been around a lot longer, too. I could avoid so many “accidents” if I would just pay attention to His instruction and follow His plan for my life–rather than following my own. But, therein lies the problem: wise counsel is pointless unless we follow it.

Have you ever had a friend come to you for advice; you give it to them; they ignore it, and then after they have an “accident”, they come back whining about how they should have listened to you in the first place? It’s frustrating, right? Imagine how God feels with us, when we do that very same thing. Thankfully, God’s grace stretches far beyond our own foolishness.

How do you respond to wise counsel, whether it be God’s, or from a friend? Are you slow to listen and quick to act; or are you quick to listen and slow to act? I love Proverbs 19:20, “Listen to advice and accept instruction, and in the end you will be wise.”

Think about it.
-Danny