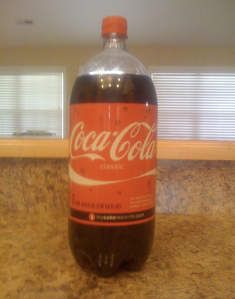 Have you ever witnessed the explosive power of a 2-liter soft drink?  I have.

A few weeks ago, while getting groceries, I came across 2-liter Cokes on sale for a great price.  Since we often have guests in our home, I decided to stock-up.

When I got home, I unloaded the groceries.  Apparently, one of the 2-liters had made its way underneath the back seat and I overlooked it. The Coke spent three, long, hot days rolling around behind the driver’s seat.  The pressure of the carbonation inside the plastic bottle became far too great to contain.

As I turned the corner into my subdivision I thought for sure someone had opened fire on us.  It was like I had driven into a really bad neighborhood in East LA (minus the Snoop Dog music).  At first, I thought I to myself, “Did I just wet my pants?”  Then I realized it was the Coke that had saturated me!  It went all over my son and me, not to mention throughout the interior of the truck.

As I cleaned up the mess, which seemed to take forever, I began making up my own curse words and random phrases.  Moments later, I realized that my son was standing right behind me.  I was so busted!

To which I replied, “I don’t know son, it’s something I just made up because I’m mad.”

Then, he took it one step further and asked, “Daddy, what did you mean when you said, ‘got down and sat in the ditch’?”

At that point, I really didn’t know what to say.  There’s nothing like a small child’s ability to hold up a mirror and help you see just how ridiculous you appear.  Ironically, it seemed the explosion of the Coke had also caused me to explode.  And by they way, I’m still cleaning up the mess from both explosions.

A few days later, I was driving somewhere and heard the song, “Under Pressure”, by David Bowie and Queen.  I recalled my experience with the exploding 2-liter as I listened to the opening lyrics:

I love the lyrics of that song.  And though it may seem funny, I especially like all the made up words and phrases.  It’s almost as if the pressure on the songwriter was so great that no real words could describe it.  Therefore, he was forced to make up words; words that make little-to-no sense.  Funny, that’ s just what I had done; made up my own senseless words.  Just like the 2-liter, when you and I explode, we say and do some crazy things.

Hearing the song by Bowie and Queen caused me to reflect upon the exploding Coke ordeal.  I began thinking about what it means to be under pressure. Just like the song says, it’s something we all face, in every area of our lives…work, family, social, financial, etc…

Since we all experience pressure, the question becomes,“What’s the best way to deal with it?” Some of us choose to deal with the stresses of life by avoiding them.  The results of practicing avoidance are almost always negative.  Like the carbonated drink bouncing around in the back of my truck, over time, life’s pressures begin to take their toll on us.  The conditions ripen.  Something small rubs us the wrong way and BAM!  We explode, leaving a mess of catastrophic proportion that takes forever to clean up.

Another unhealthy way to deal with the pressures of life is through the unique art of “Compartmentalization.”  Compartmentalizing is something that I struggle with.  As a pastor, I try to remain as even-keeled as I can be.  In attempting to do so, I tend to suppress the things that truly bother me.  And when I fail to vent or release these things in a safe place, I explode just like the soda  in the back of my truck.  Unfortunately, others are usually hurt in the process.

So, what’s the best way to deal with pressure?  Just like a 2-liter bottle, you’ve got to let it out gradually so it doesn’t explode and make a big mess.  There are a lot of different opinions regarding the best way to do this.

Doctors affirm that a routine of proper diet and exercise is one of the most effective methods.  If you’re like me, you’ve got some serious work to do in this particular area of your life.

Another method for releasing pressure is to find a hobby or a healthy activity that enables you to relax.  In other words, find something to do that provides a sense of release for the stress in your life.  And when you find this activity, engage in it on a regular basis.  Make time for it as though your life depends upon it.  Because it does!

Health experts agree that having fun adds value to your life.  The mind and body operate much better when there is a routine release of endorphins that counter the stressors in your life.  Lighten up!  Laugh a little…or a lot!  You’ll be much more fun to be around.

One thing is for sure.  When we fail to gradually release the build-up of stress in our lives, the results are not pretty.  Just like the 2-liter drink, the pressure inside of us becomes far too great to contain and we explode.  And after the explosion, there is a huge mess to clean up.