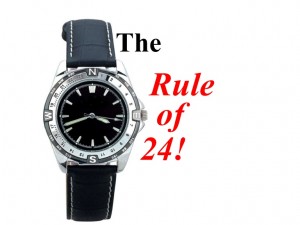 Ever have one of those moments when someone criticized you, upset you, or said something hurtful, and you realized that you either over-reacted or perhaps reacted too quickly? I have. In fact, I’ve had lots of them over the years, and that’s why I normally try to follow “The Rule of 24” which simply means waiting 24 hours before I respond to a critic or someone who has hurt me in some way.

However, as good as the rule sounds, it’s only good if you follow it. Recently, I didn’t follow my own rule and it almost cost me a good friend. I knew in my gut that I should’ve waited before reacting to the offense against me. I knew that I needed time to calm down, eliminate some of the emotion, and focus on the facts. I even had that gut-check moment where I consciously went against my better judgement because I just needed to get these things off of my chest. Big mistake. Thankfully, they forgave me and we moved past my emotional reaction.

Abraham Lincoln, arguably one of the best Presidential communicators ever and perhaps the most aggressive politician ever to rule Washington, had a similar system to “The Rule of 24.” But he didn’t always practice this discipline. Early in his political career, Lincoln had a reputation for reacting quickly in responding to critics. Moreover, he campaigned against his opponents in a very harsh manner, launching attacks on their character. Due to his phenomenal ability to craft words, he would write scathing letters to his opponents and critics that could humiliate even the most secure of leaders. Yet in 1840 he had an epiphanal moment and realized the collateral damage he had caused, which humbled him to change this fault in his character.

Lincoln began the practice of pouring out his anger, hurt, and raw emotion into letters to people whom he was upset with, then placing those letters in a desk drawer for 24 hours. From that point forward, Lincoln never sent another scathing letter because he realized the perspective he gained after giving himself time to “cool off”. Those letters were later discovered after his death.

Before you Jesus-Juke me (thanks for that term Jon Acuff & Bart Millard), I’m well aware of the Scripture that says “And don’t sin by letting anger control you. Don’t let the sun go down while you are still angry.” (Ephesians 4:26). However, I’m also aware that Paul was referencing Psalm 4:4 which says, “Don’t sin by letting anger control you. Think about it overnight and remain silent.” Both of these writers were trying to help us understand that it is a sin to allow anger to control us. The Psalmist gives us a great formula for taking time to “remain silent”, think, and process. By allowing yourself some time to cool down, it helps to remove the emotion that can lead you into sin.

Here’s why I think “The Rule of 24” can be so incredibly helpful:

2. Space makes room for new perspective – it’s also amazing how much you can ‘cool down’ in 24 hours which removes unnecessary emotion and allows you to focus more on the facts when you have that difficult conversation

3. New perspective allows room for humility – even if you’re right, approaching someone in an arrogant and prideful manner will not get you anywhere-all self-righteousness does is build bigger walls

4. Humility is a sign of love – when you humble yourself, it says to the other person, “My ego and my pride are not the most important things in the world…people are.” and that’s incredibly disarming and opens up the lines of communication. Andy Stanley says, “You can either be right, or you can build a relational bridge.”

5. Love conquers all – it’s true, even if you wait the 24 hours and the other person is still your biggest critic, at least you’ve responded in Christ-likeness…in love. And in the end, love really does win.

There you have it-‘The Rule of 24’. I realize that no formula is perfect, and sometimes we do need to address things immediately, but if we can just learn to slow down a bit, consider what’s at stake, and consider the future, we might just find that waiting 24 hours to respond to our critics will not only help us respond better, but it might also save a relationship.