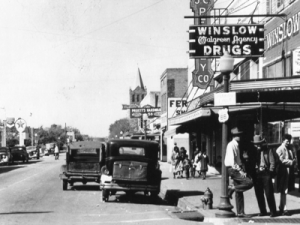 The other day I was walking downtown with a friend, drinking a cup of Port City Java.  He asked me a very direct question, “Are you making time in your schedule to have fun?”

He responded with, “You just seem a little on-edge today and that’s not like you.”

I thought for a second and said, “You know, if I just had a new Harley Davidson Heritage Softail Classic I believe I could relieve some of that stress!”

We both chuckled a bit and agreed that acquiring a new Harley would certainly take care of our need for stress release.  We were also in agreement that even a Harley wouldn’t relieve the stress of being served divorce papers for buying a $22,000 motorcycle.

My friend challenged me to be sure I was making time to have fun.  Notice he said, “making time.”  You’ve got to intentionally carve out time in your schedule for fun!  Working hard is good, but you need to balance that withTaking It Easy every once in a while.

So, that night I took my family to the snack bar in Target and we had popcorn, pretzels and Icees; something that was always fun when I was a child.  We had such a relaxing time, just sitting around the table, spilling pop-corn, licking pretzel salt, and looking at each others’ blue and red stained tongues.

I’m a driven person and I like to work hard.  Because I love my line of work, at times I have a tendency to overdo it a bit.  I can get so wrapped up in working toward meeting goals and deadlines that I forget to make time to relax.  My two children have a saying they’ve picked up from school.  When things get tense around the house they say, “Ch-Ch-Ch-Chill-ax!”  No matter what the situation is, this phrase always makes me smile.

Recently, I met an older couple who were engaged to be married, Don and Elyse.  When they found out I was a minister they asked me to perform their wedding ceremony.  As we were getting to know one another I asked where they were from.  Elyse told me she was originally from Winslow, Arizona.

I chuckled a bit and said, “The only thing I know about Winslow, Arizona is the mentioning of it in the song Take It Easy, by The Eagles.”

“Well, I’m a standing on a corner in Winslow, Arizona and such a fine sight to see. It’s a girl, my lord in a flatbed Ford slowin’ down to take a look at me.”

Elyse got very excited and told me that her father was the inspiration for that particular verse of the song.  Take It Easy was originally written by Jackson Browne.  Browne was struggling with its completion, so he gave it to his good friend, vocalist and guitarist for The Eagles, Glen Frey.  Frey had spent the night in Winslow and acquired a picture postcard of a man standing on the corner with his foot propped up on a lamppost.  That man was Elyse’s dad.

She brought me a copy of the original picture; it’s the photograph at the top of this page.  That picture was obviously taken back in the “Old Days” when life moved at a much slower pace than it does now.

Take It Easy is one of my favorite songs by The Eagles.  I can remember so vividly being 16, cruising around town in my mom’s 1978 MGB convertible, top down, stereo blaring, enjoying every measure of this “made for open road” song.  The message of Browne and Frey’s song fit so perfectly with the adolescent days of my youth.

“Take it easy, take it easy. Don’t let the sound of your own wheels drive you crazy. Lighten up while you still can. Don’t even try to understand. Just find a place to make your stand and take it easy.”

Thinking back to the days of high school conjures up memories of a life that was much easier.  My only responsibilities then were to do my school-work, help out at home, and work part-time bussing tables at a local restaurant.  I miss the simplicity of those days!  I don’t miss the confusion and cloudiness of adolescence, I just miss a time in my life when responsibilities were minimal.

Louise J. Kaplain once said, “Adolescence is a time of active deconstruction, construction, reconstruction—a period in which past, present, and future are rewoven and strung together on the threads of fantasies and wishes that do not necessarily follow the laws of linear chronology.”

How many times did your parents say things like, “You have no idea how good you’ve got it!”

“Just wait till you have a family of your own one day!”

“If you don’t eat your peas you’ll never get hair on your chest!” (Okay, that’s from a completely different memory!)

If I only knew then what I know now (I probably wouldn’t have eaten so many peas!)

Don’t get me wrong, I love my life now.  It’s amazing!  I wouldn’t trade my life for anything, responsibilities and all.  But in the midst of all the weight and responsibility of adulthood, I’ve still got to find time to Take It Easy once in a while.

What’s the fun quotient in your life?  When’s the last time you carved out a chunk of time in your schedule to justTake It Easy?  Even God takes a break.  The Scriptures tell us that after He made the Heavens and the Earth, he took a day to rest; it’s called Sabbath.

If God needs a day to rest, you do to.  So come on, turn off your phone, shut down the computer, and take a break.  Have some fun already!  Take the advice of my two children and, “Ch-Ch-Ch-Chillax!”

So, here’s your challenge: GO DO SOMETHING FUN AND RELAX.  After you’ve done so, come back to my Blog, add a comment, and tell me what you’ve done.  Let’s inspire one another as we carve out some time to Take It Easy!