It was Thursday, November 17, 1994.  I placed the phone call to my future father-in-law and asked if I could come over and speak with him.  Every nerve in my body was on fire when he answered the phone.

I replied, “Hey, this is Danny.  Are you going to be home this evening?”

I responded, “I’ve got something I would like to speak with you about.  Can I come over?”

He had no idea why I was on my way to see him.  My heart raced every second of the 30 minute drive to his house.  This was by far the hardest thing I had ever done in my entire life.

I pulled into the driveway cautiously.  He came to the door to greet me.  I entered the house, sat down, and got straight to the point.  “I love your daughter and I would like to ask your permission to have her hand in marriage.”

He looked at me very calmly and said, “Does Karri know about this?”

I said, “We’ve been talking about getting married and she knows that I will be asking for your permission before we make any further plans.”

He said, “Are you sure you’re reading her right?  If Karri wanted to get married, it seems like she would have said something to her mother and me about it.”

I said, “Yes sir, I’m sure.  We’ve been talking about it for a while and she definitely wants to get married.”

The next two hours felt like the Spanish Inquisition.  I was so intimidated.  After a couple of hours of difficult conversation he said, “If Karri wants this, then the two of you have my blessing.  But understand this, son, if you ever mistreat her in any way, you’d better give your soul to Jesus because your butt belongs to me!” (slightly edited version)  I’ll never forget that.

As I was leaving he said something else to me that I’ll never forget, “That’s my baby girl.  She’s extremely special.  One day you’ll have one of your own and you’ll understand.”

Fast forward to August 22, 2001.  After 36 hours of exhausting labor my wife gave birth to a beautiful baby girl.  Holding her in my arms for the first time was amazing!  At that moment I remembered the prophetic words of my father-in-law.  “That’s my baby girl.  She’s extremely special.  One day you’ll have one of your own and you’ll understand.”

The depth of that statement sets in with each passing year of my daughter’s life. 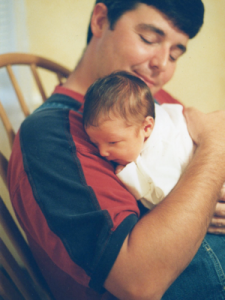 “I came to see her daddy for sit down man to man. It wasn’t any secret I’d be asking for her hand. I guess that’s why he left me waiting In the living room by myself with at least a dozen pictures of her sitting on a shelf. She was playing Cinderella. She was riding her first bike. Bouncing on the bed and looking for a pillow fight. Running through the sprinkler with a big popsicle grin. Dancing with her dad, looking up at him. In her eyes I’m Prince Charming. But to him I’m just some fella, Riding in and stealing Cinderella.”

Having children of my own has given me a completely different outlook on life.  Raising a daughter has taken it one step further.  The title of Chuck Wick’s song, “Stealing Cinderella” really hits home to me.  My little girl loves Cinderella and all other princess stories.  Her room is decorated in the princess motif.  Even her trick-or-treat costume is a princess outfit. The thought of some young man sweeping my little Cinderella away makes me want to grab my shotgun!

We have a rule in our home.  My little girl can’t date until she’s 30.  Actually, that’s my rule, her mom just laughs when I say that.  Thankfully, we have a few years before we have to worry about letting her date.  However, there are some other things we have to worry about before she turns 30… like letting go.

Letting go is a phrase that scares me.  While raising my children, I have to learn how to do it, little by little.  When my daughter was one year-old, I had to let go so she could learn how to walk.  Last year she had her first sleep-over at a friend’s house; I had to let go.  This year I had to let go as she learned how to ride a bicycle.

I was having lunch with a friend the other day and I shared with him the story of teaching my daughter how to ride her bike.  I told my friend how difficult it was for me to let go.  “I was so afraid that she would crash!”, I said.

He smiled and replied, “You think that’s hard?  Last week my 16 year-old daughter got her driver’s license.  I handed her the keys to the car so that she could drive to school.  Watching her pull out of the driveway and head down the road alone was the hardest thing I’ve ever done in my entire life!”

At each stage of parenting letting go gets harder and harder.   I thank God that I don’t have to do it all at once.  He prepares me, little by little.  As a parent, I also have to be okay with letting my children fall sometimes.  As much as it hurts them and me, it’s part of the learning process.

As my little girl was learning how to ride her bike, I told her, “You’re going to fall.  It’s inevitable.  The trick is learning how to fall and then having the courage to get back up and ride again.”

Raising children is all about letting go.  It’s difficult, but necessary.  If I held on forever, I would stifle their development.  My goal as a parent is to train my kids to leave; and not just to leave, but to leave well. One day my little Cinderella will leave the castle.  And when she does, her mom and I will ask lots of questions: “Did we do a good enough job?” “Is she ready?” “Can she handle it on her own?” “Does she know that you can’t wash red socks with a white shirt?”  (I’m 37 and still struggle with that one.  Sorry, Karri!)

As for now, I’m going to enjoy every moment of my kid’s lives.  I’m going to hold on tight when I can and let go when I have to.  I have a lot to learn about parenting.  I pray that God will help me to make wise decisions when it comes to raising my children and knowing when it’s time to let go.

How about you?  If you have kids, are you holding on too tightly?  Do you know when it’s time to let go?  Do you appreciate each moment you have with your children?  They will be gone before you know it!

“She was playing Cinderella. She was riding her first bike. Bouncing on the bed and looking for a pillow fight. Running through the sprinkler with a big popsicle grin. Dancing with her dad, looking up at him. In her eyes I’m Prince Charming. But to him I’m just some fella, Riding in and stealing Cinderella.”