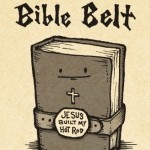 Is everyone in the south religious?

The other day I was en route to Atlanta for a meeting with some church leaders from other parts of the country. While standing in line to board the airplane I struck up a conversation with the guy next to me, who was waiting on another flight. After finding out that I was a pastor he said, “I hear religion is real big down here in the South.” Honestly, I didn’t know how to respond to his comment. I said something along the lines of, “Well, I guess it’s called the ‘Bible Belt’ for a reason.” What a dumb thing to say. The line began to move and I was glad because it meant that our conversation was over. I shook his hand, wished him safe travels, and boarded the flight.

For the next 72 minutes in the air I kept replaying the conversation in my head, wishing that I could’ve thought of a better response, like, “Religion is big everywhere! But knowing Christ is not about a religion, it’s about a relationship.” Maybe I was over analyzing things-I have a tendency to do that. However, the stranger’s comment struck a nerve. Here’s why:

What makes following Jesus so unique is that it’s not about a religion at all-it’s about a relationship. One thing that turns people away from really knowing God is religion. It leaves them frustrated and disillusioned because it makes them feel as if they have to keep a bunch of rules and loose their identity (i.e. “drink the kool-aid”).

If someone had said to me, “Getting married is about keeping a bunch of rules and loosing your own identity.“, I would’ve never done it. Because the very thing that excited me about marriage was the idea of being in love-giving my heart to someone and them giving theirs back to me in return, so that we could know each another intimately.

God knows us intimately and wants us to know Him in the same way. He has initiated a love relationship with humanity through His Son, Jesus. He’s made His heart available to each of us and desires that we would reciprocate. That can only happen through a relationship-not a religion.

So, if you’re all about keeping rules and “drinking the kool-aid”, find yourself a religion-there are lots to choose from (and not just in the South-they’re all over the world). But if the potential of a relationship with someone who will love you unconditionally and accept you just the way you are intrigues you, I want to encourage you to know Jesus.

Feel free to contact me if you’d like to know more about having a relationship with Jesus.