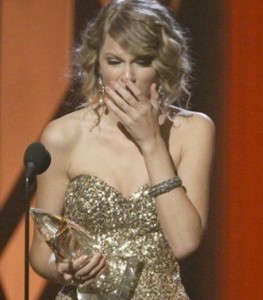 As many of you already know, Taylor Swift won “Entertainer Of The Year” at the 2009 CMA’s.  Taylor is only 18…it’s quite an anomaly for someone so young to win this award.  Even if you’re not a fan, it’s hard to argue with her success and her immense talent.  After all, she writes, plays, and produces most of her own music…there are very few country music superstars who fit into that category.

When interviewed after the awards show, Taylor Swift said that she understood what an incredible honor it was to win the Entertainer Of The Year award.  She expressed an enormous amount of humility and gratitude.  She also said that she never dreamed this would happen to her… especially at such an early stage in her career.

When asked their opinion, legendary entertainers such as Tim McGraw, Faith Hill, and Reba McEntire expressed great joy for the young artist.  But others weren’t quite as supportive.  Certain entertainers, who will remain nameless, felt that Taylor was too young to win this award.  These naysayers also stated that it wasn’t fair to the other nominees who had been in the music business a lot longer than Taylor.   Ironically enough, the entertainers who expressed their displeasure have not been on the charts lately with any of their songs.

Success and criticism go hand-in-hand.  And, like Newton’s Third Law Of Motion, “For every action, there is an equal and opposite reaction”, anytime someone experiences success, others follow with criticism.  Think about it:  if you’re like me and need to lose weight, the moment that you start eating right, working out, and dropping a few pounds, other people who need to lose weight suddenly get cynical.  But yet the skinny people cheer you on!

When I was in college I had a professor who said,

“There are two kinds of people in this world, ‘Puffers’ and ‘Poppers’.  The puffers are encouraging and want you to succeed; they constantly ‘puff’ you up.  The poppers wait until you experience some level of success, and then they come along and ‘pop’ your bubble.”

How true is that?

Why would anyone want to be a “Popper”?  Is it merely an issue of jealousy, or is it something deeper?  In my opinion, it’s deeper.   We think that putting other people down will somehow make us feel better about our own inadequacies.  In other words, when the light shines on someone else, we suddenly find ourselves in the shadows…and that can be a lonely place.  Being out of the spotlight causes us to reflect upon our own lives…and quite honestly, most of us hate doing that.  So, rather than allowing other people a time to shine, we invariably do something to aim the spotlight right back on ourselves–and in doing so, we become a “Popper”.

I try to be a Puffer, but I must admit, there are times in my life when I am a Popper.  As I get older, I’m realizing that my life needs to be less about my dreams being fulfilled, and more about other people’s dreams coming true.  Sure, I believe that God wants to give me the desires of my heart.  But, that’s a lot easier for Him to do when I take the focus off of myself and put it onto others.

I’m starting to realize how important it is for me to help others succeed; in my short journey on this planet, I’ve found that “being a Puffer” is much more rewarding than “being a Popper”.  I love watching other people’s dreams come true.  Sure, at times I may get a bit envious, but it’s in those moments that God reminds me that this life is not about me.

What kind of person are you?  Are you a “Puffer” or a “Popper”?  Are you able to rejoice in the success of others, or do you find yourself popping their bubbles in order to make yourself feel better?  Be honest as you think about it.