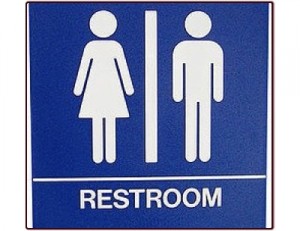 For Christmas, my family and I went home to South Louisiana. It’s a 16-hour drive, so as you can imagine, we made lots of pit-stops along the way. As we traveled, I noticed something about public restrooms: many of them were in rough shape–lots of dirty fixtures, and lots of them were out of toilet paper, soap, and paper towels. I thought to myself, “Funny…I guess nobody wants to clean public restrooms. I can’t blame them, it’s such a gross and thankless job!”

There’s a guy named Steve Sjogren who spent an entire year of his life cleaning public restrooms. He called it a “Conspiracy of Kindness”, and even wrote a book about the subject with that same title. Sjogren would go into a public place, with cleaning supplies in hand, and ask, “Can I clean your restroom?” Sjogren said that people would look at him very strangely (as you can imagine), and most of the time they would say something like, “Go ahead-knock yourself out!”

Steve Sjogren said that almost every time he did such a random act of kindness, people would ask, “Why on earth are your doing this?” Sjogren would reply, “Because I want to serve you, and tell you about the love of Christ, who was the ultimate servant.” Man…that’s intense! Can you imagine cleaning those nasty toilets? I can’t. The thought of it just completely grosses me out!

2010 is here. My prayer this year is, “Lord, may I become less, while you and others become more.” I want to take my servanthood up a notch. Or, as Ed Young Jr. says, “A whole nutha level!” Who knows, maybe I’ll even clean a few toilets…guess I should start with the ones at my house first!