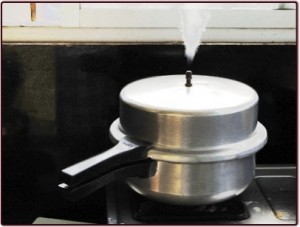 My grandmother is an awesome cook.  Unfortunately, I don’t get to eat her food as often as I’d like because she lives 12 hours away.  Every time I go for a visit she prepares my favorite meal: fried chicken, fried okra, creamed style corn, corn bread, and creamed potatoes (a.k.a. “mashed potatoes”–she uses so much butter and cream that we call them “creamed potatoes”).  Speaking of potatoes, I have vivid memories from my childhood of her standing in the kitchen, peeling potatoes, slicing them up, and cooking them in an old-timey pressure cooker.

One summer, when I was about 9 years old, I spent a few weeks with my grandmother at her home in Alabama.  I recall one particular evening that she was cooking dinner:  My uncle and I were watching tv when suddenly, all hell broke loose!   We heard a loud explosion in the kitchen that sounded like a bomb going off!  The explosion was immediately followed by a blood-curdling scream, and then a string of explicatives that would make a pirate blush!

My uncle and I raced into the kitchen, only to find potatoes covering the floor, walls, cabinets, ceiling, and my grandmother.  Apparently, a small piece of potato had gotten lodged in the vent on top of the pressure cooker, thereby rendering the steam unable to escape.  The result: immense pressure had built up inside of the cooker, and with no way to release, it was forced to explode.  That experience left an indelible mark on my cerebral cortex!

As I’ve reflected over the years, I’ve come to realize that I am a lot like that pressure cooker.  I have a tendency to compartmentalize, and not fully deal with things as they happen.  Sure, I may deal with the physical aspect of a problem, but I don’t always finish dealing with the emotional part of it.  The result: several little pieces of potatoes clog my vents.  And when my vents get clogged, the steam can’t escape.  Therefore, I explode, leaving a mess all around me.

So, as I’m getting older, and learning more about myself,  I’ve come to realize how important it is for me to have a safe place to “vent”.  I do this on a few levels:  First, with God.  I make sure that I have a daily time with God that allows me to get centered spiritually and tune in to His voice.  Secondly, I have a couple of close friends who live out of state.  They know the “real me” and when I need to “blow off steam” I call them; and they reciprocate, too.  And finally, I have been blessed with an amazing wife who has the natural ability to see through the mess of “exploded potatoes” in my life; she is one of the wisest people I know and is able to speak the truth in love like nobody else can.

These relationships are invaluable and provide a safe environment to “vent the steam”, so that I don’t explode like those potatoes did.  I’ve also noticed that lack of physical activity clogs my vents, so I try to stay active.

I haven’t perfected the process of “venting” yet, but I’m learning as I go.  How about you?  How do you keep the pressure in your life from building up?  What do you do to “blow off steam” so that your vents don’t get clogged?  FACT—Failure to deal with stress will manifest itself physiologically and impair relationships with others.  It’s time to make an honest assessment of your situation and be proactive…otherwise, you will explode like my grandmother’s pressure cooker, and those who care about you will be left cleaning up the mess.