Ms. “G” and the Power of Humor 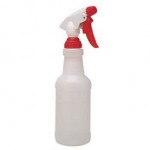 I believe humor is one of the most powerful traits an individual can possess. Sure, it can be used in the most inappropriate of ways, but when used appropriately, it can also work wonders in the human soul.

During my sophomore year of high school I had an Algebra II teacher named Ms. Goliwas (who, by the way, was a former Catholic nun). At first, I didn’t like her because she seemed so serious all of the time. But as the school year progressed, I began sensing that she had a very dry wit, which meant that we had something in common-HUMOR!

Whenever someone in our class would get out of line, or cease to pay attention, she would squirt them with water from a big plastic spray bottle. Most people found her means for attention getting to be quite irritating, which further perpetuated their distain for Ms. Goliwas. However, I found her methods to be funny, and deep down, I suspected that she did, as well.

One day my curiosity got the best of me and I decided to find out whether or not Ole Ms. Goliwas did in fact have a sense of humor. So, one afternoon, I got to class early, grabbed the squirt bottle, hid behind the door, and waited for her arrival. Soon, an audience gathered in the classroom-everyone wanted to see how this exercise in fortitude would turn out. I was so nervous! Either this was going to be the funniest thing that I had ever done, or it was going to get me into the biggest trouble that I’d ever been in. Either way, it was a gamble I was willing to take.

Then it happened: Ms. Goliwas walked into the room, and from behind the door I called her name. As she turned around, I pulled the trigger and commenced “Operation Spray Back.” I got her good, too-right in the face. As she stared at me stone cold-like, the gravity of my actions began to sink in, and I awaited my fate as the water dripped ever so slowly from her glasses.

Suddenly, her face lit up, she burst into laughter, and began chasing me around the room to regain possession of her trusted spray bottle. This ex-nun was quick, too! As soon as she got the sprayer back, I got the soaking of my life, and she, along with our entire class, laughed uncontrollably for what seemed like an eternity. I had done it! I unlocked her sense of humor and exposed it for all to see. Her level of coolness was immediately elevated in our sight and from that day forward, Ms. Goliwas became known as, Ms. “G”.

I learned a lot in Ms. “G’s” class that year, and it had little to do with Algebra II. I learned that a sense of humor is the most powerful trait a person can have. When used correctly, it can relieve major tension, pull someone out of the depths of despair, and build a relational bridge for even the most hardened of hearts to cross.

When’s the last time that you really laughed? I’m not just talking about “LOL”, but laughing so hard that you can’t catch your breath. The old adage “Laughter is the best medicine for the soul” is certainly true. Remember the movie Patch Adams, with Robin Williams? It was the story of a doctor who used humor as part of his treatment. And do you know what? In some cases, it actually helped people to get better! Scientific studies have shown that if we are in a constant state of emotional tension, it can have an extremely negative impact upon on our physical condition, too.

Maybe you need to stop what you’re doing right now and go do something funny. I promise, you’ll feel better! Why not grab a spray bottle, and squirt someone today? A sense of humor is worth it’s weight in gold! And besides, life is way too short to be serious all of the time.