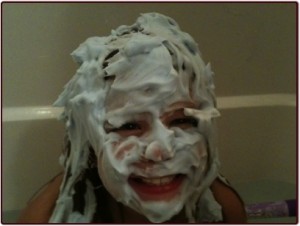 Last year I had to go out of town to attend a work-related convention, so my family dropped me off at the airport very early in the morning to catch a flight.  As I was getting out of the car and telling my children, “Goodbye”, I told my son, who was 4 at the time, “Buddy, you’re the man of the house while I’m gone!  I want you to take care of the girls.  Okay?”

To which he responded, “Sure thing Dad!  Got it!”

Later that night, I called to check-in with the family and tell the kids, “Goodnight”.  When my wife answered the phone she was laughing, and said, “You’re not going to believe what your son just did!”

I thought to myself, “Anytime one of us uses the term, “Your Son” or “Your Daughter”, it usually means whatever the children have done is somehow the other parent’s fault.”

She continued, “While your daughter was getting ready for bed, your son came into the bathroom, smacked her on the butt, and said, “Move it girl!  Dad said I’m in charge around here while he’s gone!”

When I charged him with being the “man of the house” while I was gone, I was trying to inspire him to show a little extra consideration toward the girls.  Instead, he thought I was transferring some type of imaginary power over to him…and believe me, when he chose to exercise that “pseudo power”, he found out quickly that was not what Dad had in mind.

Verbal Communication…it’s a tricky thing; not to mention, a skill that I need to work on.  Sometimes, I think that I’m saying one thing and it gets interpreted as something completely different.  Somewhere between the time that the words leave my mouth, and the time that the other person processes them, new meaning is formed.  There are lots of different reasons for this, in fact, I had an entire class devoted to this very subject in Graduate School.  But, honestly, I don’t remember much about it.

One thing is certain, communication is important in every relationship.  It’s particularly critical in the arena of leadership.  And, whether you are a leader in your family, among your friends, or in the workplace, there are a few important lessons that can be gleaned from that all too famous “smack on the bottom” that my son gave to my daughter.

When it comes to leadership, it’s imperative to articulate (as clearly as possible) any, and all expectations that you may have of those whom you are leading.  Because if you don’t, the result will be complete and utter frustration of those people.  Believe me, I know this to be true, first hand.  As a leader, I have utterly frustrated my share of people due to my lack of communication at times.

Also, we can’t automatically assume that everyone else interprets words in the same way we do (you know what happens when you assume, right?).  Because, the fact of the matter is, they don’t!  And why is that?  Maybe it has something to do with the fact that when you look up a word in a dictionary, there are lots of different definitions for it…not to mention all the synonyms.

And finally, I believe that communication is a learned art, not something that we are innately good at; it takes practice and time.  And like most everything in life, failure can be the best teacher if we learn from our mistakes and actually do it better next time.

I’ve got a lot to learn about the art of verbal communication and I’m passionate about getting better.  How about you?  How well do you communicate?  Do you take the time to make sure others around you understand what you are saying, or do you automatically assume they interpret information the same way you do?