The ball in this picture is the “game ball” from the final play-off game that the New Song Church Minor League team played tonight. I love this team, perhaps more than any other team that I’ve ever had the privilege of helping coach. For starters, my son plays on this team and it was a really good season for him on lots of levels. However, all of the boys on this team worked really hard this year, everyone’s playing ability increased greatly, and all 12 young men really came together as a team.

But, in spite of a winning streak heading into the playoffs, tonight we lost. We came in #4 this season instead of #1.

Tonight’s game really was a “great game”. It was neck and neck all the way until the end. The other team was up by two, it was the bottom of the 6th (only 6 innings in minor league), 2 outs, bases loaded, and guess who was up to bat? My son. We were all watching, waiting, hoping, and praying that he would knock the skin off the ball and get the runners in (something he’s done before). He waited for the right pitch, loaded up his back leg with power, swung the bat, and hit a hard line drive. Everyone watched as the whole thing appeared to be happening in slow-motion.  I’ll admit, even though I’ve preached against praying these types of prayers, I was in fact praying, “Dear God, please, please, please don’t let anyone catch that ball. Let him knock all of those runners in so that we can celebrate and advance to the next playoff game!” But, the short stop made a quick play and caught it firmly in his glove. Game over.

The other team erupted, our team gasped, and my son began to cry…and so did some of the other kids on our team. It was as if someone had punched us in the heart.

As a coaching staff, we gave our team the best pep-talk we could. I hugged my son as hard as I could and explained that losing the game was not his fault-just like it takes the entire team to win a game, it takes the entire team to lose the game. We tried to help him understand that there were plenty of other plays we missed, runners we should’ve tagged out, hitters who had struck out, bad pitches we threw, etc… But it still didn’t remove the pain of losing from his heart, or anyone else’s for that matter.

Losing sucks. In fact, dealing with loss at any level is hard, but it’s a part of life that we must learn to embrace and allow to shape us…not define us. That was one of the main things I told my son tonight. “Allow this loss to shape you-to shape you as a player and to shape your character, because how you lose matters just as much as how you win. But don’t let this loss define who you are as a player or as a person.”

As you go throughout life and experience loss, may you face it in such a manner that you allow it to shape your character and make you better rather that allowing it to define you, keeping you stuck in the past, unable to move forward, and unable to experience a fuller, richer story that God is writing for you. 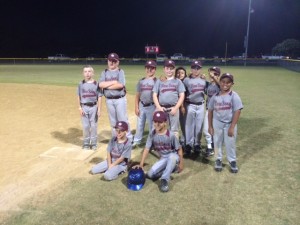