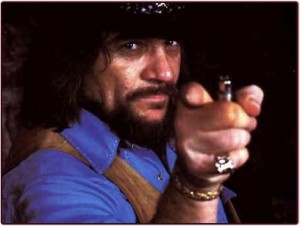 If you read my last blog post, “WHATEVER YOU DO, DON’T HIT THE GAS!”, you’ll remember that I was bragging about my truck; in fact, I called it “The King of All Four-Wheel Drives”. Guess what? I’m eating crow today, because yesterday, I had to take my Chevy Z71 pickup truck to the mechanic for a couple of repairs–repairs that wound up costing me $900.00…and I didn’t even get all the repairs done. God has a unique way of humbling us. Though, I will say, my Chevy has cost me far less than any Ford I’ve owned. But I digress…

Anyway, while my truck was in the shop, I borrowed my friend’s car to run to the store for an afternoon pick-me-up: an ice cold Coca-Cola. While I was driving her car, the song “Ladies Love Outlaws”, by Waylon Jennings, came on the radio. Because I love old-school country music, I cranked up the stereo, and began to sing along at the top of my lungs. It was also a pretty day, so I rolled the windows down–that was a mistake!

As I was pulling into the gas station, I noticed a rather tough-looking dude, standing beside his Chevy Z71, staring at me like I was total freak. It dawned on me: “I’m driving an electric blue PT Cruiser, the windows are down, and I’m singing Waylon Jennings at the top of my lungs for the whole world to hear”:

At least it wasn’t Shania Twain’s song, “Man, I Feel Like A Woman”!

As soon as I realized what a goober-head I looked like, I was certain that man was going to yank me out of the “chick car” I was driving, and revoke my “Man Card”. Thankfully, he didn’t. Incidentally, www.AskMen.com voted the Chrysler PT Cruiser as #7 on the list of Top Ten Chick Cars…at least it wasn’t #1.

I wanted so badly to tell the guy that was scrutinizing me that the electric blue PT Cruiser I was driving was not mine–it belonged to a female friend. And most importantly, I wanted to let him know that I too, in fact, have a Chevy Z71, just like the one he was driving; but, it was in the shop. However, by the time I found a parking space, the captain of the “Macho Police” had driven off, shaking his head in disgust on behalf of all the other “Man Card” holders in this world. Thankfully, Waylon Jennings wasn’t around to witness me desecrating one of his sacred country anthems.

Thanks Cheryl, for loaning me your car, and almost getting my “Man Card” revoked.

Things aren’t always what they appear to be.

If you’re like me, you can easily fall into the trap of passing judgement on others whom you don’t know. After all, it’s super easy, and it releases us from the responsibility of actually having to take the time to get to know someone else’s situation. Heaven forbid we actually have to make an emotional investment in someone we don’t know very well.

Hopefully, my story will serve as a reminder to pause before you judge, find out the facts for yourself, and remember that things aren’t always what they appear to be. At some point in your life, you just might find yourself misunderstood, driving your “electric blue PT Cruiser”, and in need of a second chance to make a first impression.

Think about it.
-Danny