I’m With The Band 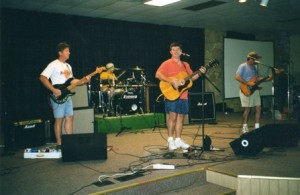 If you know me, you know I’m a musician.  It’s a gift from God, no doubt, but sometimes others don’t understand it.  Little Big Town’s 2007 release, “I’m With The Band” is a song I identify with. Check out these lyrics:

“Last night in Memphis, Tonight in New Orleans, Tomorrow I’ll be miles from here, Ain’t nothing to me, nothing to me, Sweet gypsy highway, Won’t you let me chase my dream, Cause I got a song to take me there, And it’s something to see, something to see, Lord I was born with a suitcase in my hand, Living in a life that few could understand, Sometimes it gets so confusing that I don’t know where I am, But I always know who I’m with, I’m with the band”

“Lord I was born with a suitcase in my hands; living in a life that few could understand…”  Before my wife and I had children I used to travel a lot, playing music with my friends.  It was a season in life that I loved dearly and wouldn’t trade for anything. The music, the road, new towns, new experiences, a lifestyle that is quite alluring to us musician-types.

The picture at the top of the page was taken at a gig in Waco, Texas.  The guys in the picture are some of my closest friends in the world. We had a band called “Big Fish Combo”, traveled all over the southern United States, and shared a lot of life together.  When four guys share a hotel room, it’s amazing how much you learn about one another.  Each time we get together the stories get funnier and much more exaggerated.  I’d like to take a moment to tell you a quick one…even though a few years have gone by, the embellishment will be minimal, I assure you.

On the way back from playing a gig in Panama City Beach, Florida my friends and I rented a U-Haul trailer to carry our equipment.  Somewhere between Florida and Louisiana we discovered that the tail-lights on the trailer were not working.  Just outside of Mobile, Alabama we got into a traffic jam.  The lady driving the vehicle directly behind us was following a bit too closely and almost rear-ended our trailer because it had no brake lights.

She flew around the side of our Suburban motioning for Joe, who was driving, to roll down his window.  Up to that point we had all been sleeping but woke up suddenly to the sound of an irate female voice yelling at Joe.

“Your trailer lights are out and I almost hit you!”

Without missing a beat, he looked at her and yelled back out of the window, “Yeah, it’s a bad coupling on the poop-hatch!”

The lady looked quite puzzled and yelled, “What?”

“It’s a bad coupling on the poop-hatch.  We must have a flux capacitor that’s inverted out of phase!”

It was as if we had just stepped into a scene from the movie “Back To The Future.”

We all laughed uncontrollably, wondering if maybe Joe did too many drugs in pre-school.  Having never dealt with a bad coupling on the poop-hatch, the woman obviously didn’t know how to respond.

Joe thanked her for her concern and assured her that once we got back to Mission Control we’d have our people lubricate the deltoid generator and torque the flux capacitor.  I’m almost positive I saw her dialing 911 as she drove away.

Some of you totally did not get that story and that’s okay.  Others of you may be thinking, “Creative types are so weird!”  And it’s true, we are.  We have a warped sense of humor and creativity that begins at a very young age.  I thank God for that.  It’s a beautiful outlook on life to have!  In the company of other creative people we feel right at home; almost as if we’re in our own little universe.

For as long as I can remember, music has been a part of my life.  I was two years old when I got my first guitar.  My mom took me into the basement and carefully crafted an awesome home-made instrument out of a two-by-four, nails, and rubber bands.  I played that thing like I was Jimmy Hendrix shredding a 1968 Fender Stratocaster.

God gave me the gift of music. It has brought me much pleasure and enriched my life deeply.  I can’t imagine what my world would be like without being able to sing and play guitar.  There came a point in my journey when I had to make a choice.  I could either use the gift of music for selfish reasons or use it for God.  I chose the latter and have never regretted that decision.

Over the past fifteen years, God has given me lots of opportunities to share the gift of music with others by using it to spread the message of Jesus Christ.  Had I chosen to use the gift for selfish gain, I dare say that my sphere of influence would have been much smaller.  When we we allow God to maximize our gift potential the sky is the limit!

1 Peter 4:10 says, “Each one should use whatever gift he has received to serve others, faithfully administering God’s grace in its various forms.”  What’s your gift?  What are you good at?  How do you use it?  At the end of the day, have you been selfish with it?  Or, have lives been changed as a result of sharing the gift God has given you?

“Lord I was born with a suitcase in my hand, Living in a life that few could understand Sometimes it gets so confusing that I don’t know where I am, But I always know who I’m with, I’m with the band” 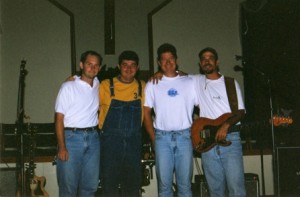