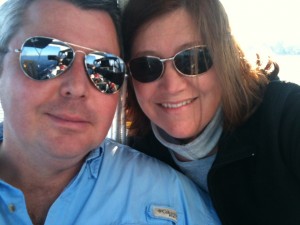 Have you ever found yourself to be physically present during a conversation, but not mentally and emotionally present? Do you often have to ask others to repeat themselves so that you can hear what they’ve just said?

My beautiful wife (@karri_rogers for all you Tweeps out there) and I have been happily married for over 16 years. We’re best friends. We know each other so well that most of the time we can finish one another’s sentences. And 99% of the time, we can tell what the other person is thinking just by body language and facial expressions. When you get to know someone that well, it’s easy to take communication for granted. It’s easy to be physically present, but checked out mentally and emotinally. In fact, it is possible to function this way for a long time…but it will eventually erode the intimacy in your relationship.

The other day Karri and I were having a lunch-date. By the way, if you are married, you need to date your mate regularly-no excuses! Make time for lunches, dinners, long walks, etc… It’s critical to the success of your marriage. Back to my lunch-date story: As Karri and I were eating, she asked me a question. I didn’t really hear what she said, but after she pointed at what she was talking about, I put 1 + 1 together and figured out exactly what her question was. So, without missing a beat, I answered her quickly. Then, mentally I gave myself a huge high-five, because I was able to figure out her question without having to say, “Huh? What did you say?” It felt so comfortable knowing her well enough that I didn’t even have to listen to her in order to understand her. But at the same time, something about what had just happened felt insanely wrong, too.

Almost instantly, I began to wonder, “Why didn’t I hear what she said? Is there a problem with my hearing? No, that can’t be, because I’ve been listening to every single thing that’s being said at the other tables around me, so my hearing is just fine!” (Ding! Ding! Ding!) A bell went off in my head. I realized that I had been paying attention to all the other conversatoins going on around me, but I had failed to focus on the most important one in the room-ours.

It’s so easy to be physically present, but not mentally and emotionally present. It’s almost natural to slip into a routine and allow our mind to wander outside of what’s happening right in front of us. But, that’s how people get killed on Deadliest Catch. Right? And that’s how a lot of relationships die, too. If you’re married, how many times has your spouse said something along the lines of, “You’re not hearing what I’m saying!”

Are you guilty of paying attention to all the other things going on around you, but missing what’s happening in front of you? I know I am. So, I’ve made a conscious decision to work on BEING PRESENT-not just physically, but mentally and emotionally, too.