Tuesday, November 4, 2008, was a defining moment for our nation as Barack Obama was elected to be the 44th President of the United States of America.  Regardless of whether you agree with his policies, President Elect Obama has made history as the first African American to ever hold the highest office in the USA.  This presidency has the potential to help heal the racial divide that still exists in our nation today.

If you’re like me, you’re glad the Presidential Election is over.  Even if your favored candidate was not elected, you’re ready to move on.  By the time November 4th had rolled around, I was extremely tired of the calls, letters and emails, both from the campaign trail as well as individuals lobbying for their favorite candidate.

I remember several years ago, a new administration had taken over the White House, and I was quite frustrated with its direction.  I began airing my negative opinions to a friend.  I was being quite brutal toward our nation’s President.  My friend listened as I slammed our governmental authorities.  After a few moments, he looked at me and said, “Danny, I’m surprised at your attitude.”

“Why?”, I asked.  “You mean to tell me that you agree with the President?”, I continued.

“I may not agree with him, but I don’t have the right to question God.”, he replied.

“Question God?  I’m not questioning God.  I just think the guy is an idiot!”, I said.

“Danny, don’t you know that God ordains the government and appoints the leaders that rule over us?  You should pray for your president, not gossip about him!”, he said.

I was so humiliated.  All of a sudden, I was looking in a mirror and repulsed by my reflection.  I saw a gossip.  I saw someone who had become a part of the problem and not the solution.  I saw a very ungodly person.  I spent time in prayer and read Romans 13:1-2.

“Everyone must submit himself to the governing authorities, for there is no authority except that which God has established. The authorities that exist have been established by God. Consequently, he who rebels against the authority is rebelling against what God has instituted, and those who do so will bring judgment on themselves.”   -Romans 13:1-2

Recently, my pastor preached a sermon entitled, “Rethink Freedom.”   He challenged us to rethink our perspective on the freedom that has been given to us by God as well as the freedom afforded to us by our government.  To some, the message was both timely and right on target.  But, to a few the message was a bit controversial and it made them uncomfortable.  In today’s culture, anytime you mix politics and religion you’re asking for trouble.

At the end of his sermon, my pastor challenged each of us to write a letter of prayer to God, asking him to forgive our sin and heal our divided nation.  Once the prayers were written, he invited us to make our way forward, onto the stage, and post them onto the back wall.  The picture below was taken immediately following one of our worship services.  It was quite a powerful experience that gave us a new perspective on both freedom and the government. 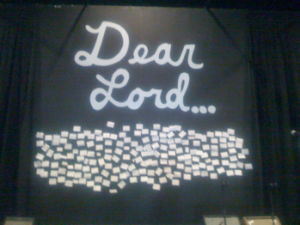 Over the last several years the United States has become the “Divided States”.  A great chasm has gradually formed among the people of the USA.  In our quest to preserve liberty and in our search for individualism, we’ve somehow managed to alienate one another politically, socially, ethnically, culturally, and spiritually.

How do we repair this break?  How do we become the United States instead of the “Divided States”?  Is it even possible?

My friend Carlos recently wrote a blog entitled, “Purple People.”  In his blog, Carlos used humor to make the point that we should stop trying to be “Red States” or “Blue States.”  Instead, we should come together and be “Purple States”.  It’s really a profound message!

Remember that song, Come Together, by the Beatles?  The lyrics are a bit “out there” but the overall message of the song was one of unity.  It served as a battle-cry for a generation that had become quite divided politically.

The United States of America needs to “Come Together.”  Scripture is clear that only one thing can unite our land; that one thing is God.

“Then if my people who are called by my name will humble themselves and pray and seek my face and turn from their wicked ways, I will hear from heaven and will forgive their sins and restore their land.”  -2 Chronicles 7:14-15

So, where do we begin?  We must take an introspective journey into our own lives and hearts.  We must ask God to reveal the areas that are ungodly.  We must confess these things and then ask God to help us turn from them.

Trust God to be God.  Remember that He is in control of time and history.  He has a perfect plan; His plan, not our plan.